Early in 2012, Dr. Bill Shade reminded the Board that he had passed the age limit to be in the Director’s chair. He asked them to have someone in place by the end of 2012. God took over and began a series of events that only He could have orchestrated. As things began to unfold, we realized that God had ordained what was happening and had begun the process years before. Let us share that process with you. Ron Barnes was born in Madison, Georgia, the home of Source of Light Ministries, while his father was deployed in Vietnam. Ron’s grandfather is Dr. Glenn Dix, who was serving at that time as the General Director of the Mission. As a child Ron was in and out of Source of Light many times and grew up with some of the men and women who now serve on staff.

In 1988, Ron dedicated his life to full-time service at Camp of the Nations, founded by Dr. Bill Shade. He served for a year on Camp of the Nations staff on the outreach team, and as head counselor in 1989, before going to Baptist Bible College in Clarks Summit, Pennsylvania.

Ron distinguished himself in college and served as Youth Pastor at First Baptist Church, Horseheads, New York, during his college years. In 1993, Ron enrolled in Baptist Bible Seminary during which time he worked in church planting / church recovery, as Pastor of Faith Baptist Church of Dallas, Pennsylvania. In 1993, Ron was married to Brenda Rice of Savannah, New York. Ron and Brenda had their first child, Ronnie, in 1995.

In 1996, Ron and Brenda joined ABWE, and transitioned from their Pastorate at Faith Baptist Church. During that time, Ron began making survey trips into Central Europe for the mission. In 1997 and 1999, their daughters, Victoria and Sophia were born. In 1998, Ron was ordained for the ministry. In 2000, Ron graduated from Baptist Bible Seminary with an Master of Divinity and was commissioned as a missionary to Hungary where, during and after language acquisition, he was instrumental in starting the Ugrodeska Biblia Iskola (Springboard Bible School), and the Annual Good Shepherd Conference, for training elders and church leaders. Ron and Brenda spent the next five years ministering to the Hungarian church and its people.

In May of 2006, ABWE chose Ron to open the Czech Republic and Ron became the Country Coordinator / Team Leader. There Ron was active in church planting, mentoring national church planters and pastors, and partnered in helping to start the Biblical Theological Seminary, training elders and church leaders. In addition, Ron provided strategic planning assistance for sister missions and churches. ABWE again changed Ron’s assignment and in 2011 appointed him as Strategic Coordinator for Asia, a task that focused on strategic initiatives, mobilization, opening new fields, and developing ministries among unreached and unengaged people groups.

From time-to-time during Ron’s extensive career with ABWE, Dr. Shade met with him in an informal setting and would discuss the need for someone with experience and ability to lead the rapidly expanding ministry of Source of Light Ministries International. At one point, Dr. Shade described the needed profile for his successor – Someone with sound academic credentials, considerable cross-cultural experience in a variety of cultural settings, and tested leadership and management skills. And in addition, because of the unique character of Source of Light among missions, someone with an intrinsic connection to the Mission that could understand and embrace its structure and vision. After reciting that profile, Dr. Shade had told Ron, “I really know of only one man who fits all of those criteria.” When Ron had asked, “Who is that?” Dr. Shade told him, “You are the man.”

That conversation took place several years ago but when the Source of Light Ministries Board Search Committee began their work, Dr. Shade, once again mentioned Ron Barnes as a man who met all of the qualifications the Board was looking for. The Board asked Dr. Shade to approach Ron and inquire if he would permit the Search Committee to talk with him. The rest is history. 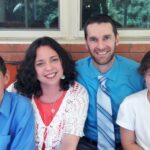 Brian Thigpen is a husband and father of two. God’s path took him from math teaching to international education to international ministry partnerships. As his love for working alongside diverse believers grew, so did his wife’s health issues. Those developing limitations brought the Thigpens back to the US in 2007. For the next decade, Brian taught high school math in a public school. On a missions field trip for their two homeschool children, God brought them to Source of Light. The plan was to stay two hours, but the Thigpens are still here three years later! Brian serves as the Chief Financial Officer, using God’s preparation in his life to serve SLM missionaries around the world.

Phil is the Director of Operations. He joined Source of Light after years of owning and managing businesses in Florida. The Winder family has a storied heritage in church ministry and missions with several family members serving in ministry.

Hugh was born & raised in Fort Worth, TX.  He has a varied business background from 20 years with Tandy Leather co. to owning and operating businesses.  His experiences include distribution, manufacturing, multiple retail store mgt., national marketing, and executive mgt. positions.  He and his wife LaVon sold their last business in 2008. They have traveled and done volunteer work since that time.  They have volunteered here at Source of Light Ministries since Nov. 2014.